My first experience with sledding was on Christmas day, hence the name.

I am at the stage of wingfoiling where I need to get as much air time as possible to learn how to get on, and stay on, the foil. I also need to conserve my energy. Falling in often is not an option.

So, I line up two points on my local coast where I can travel between them mostly on a broad reach. A 6kms straight line run can turn into a 10 or 12kms run when you zig-zag enough.
Southerly winds around here make the swell rise and northerlies tend to knock it flat.

You will get wind waves but you do not want so much that you are in a wind shadow at the bottom of the wave/swell.

I have a bit of a go at standing up but mostly I stay in the kneeling position. Gain speed first and then shuffle back on the board. 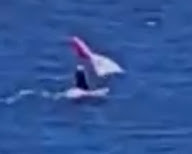 Open ocean is a fun place to be and while choppy weather looks intimidating when you are moving mostly down wind (broad reaching) it smooths out for you.
A couple of things to watch out for:
Also, I am working on an item that I call "elbow patches", stick-on rubber patches to go on the wing about a meter from the wing tips.
My deck is completely covered in traction grip and these patches on my wing should allow the wing to rest on the front deck of the board.
Another trick when running (going straight down wind) is to rest the Duotone boom into the traction grip at the front of the board. You are unlikely to be foiling when doing this but it is a useful self-rescue position. Steering in this position is a matter of moving the wing around from side to side.
Sometimes you can teach yourself, or you can get someone to teach you properly like
James Casey on YouTube
Posted by Bruce White at 1:23 PM 1 comment: